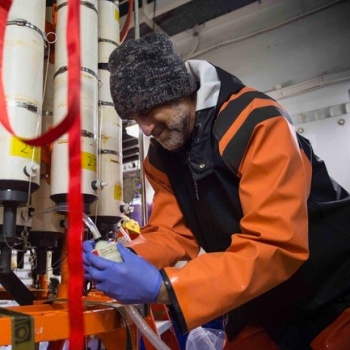 Martin Fleisher is from the Lamont-Doherty Earth Observatory of Columbia University. He has partnered with Bob Anderson for more than 30 years, managing the chemistry labs and analytical facilities used by students working with Anderson and with many other investigators at Lamont. Their work has focused mainly on measurements of naturally-occurring isotopes in the U- and Th- decay series.

Marty has been on four previous US GEOTRACES cruises. On GP15, he’ll be one of the people responsible for water sampling from the non-contamination prone element rosette, along with co-Chief Scientist Karen Casciotti and one of her students, Colette Kelly. In addition, Marty will be responsible for a small coring device that will be attached to the bottom of the sampling rosette. This mono-corer will be deployed once on the last operation at each station.

As part of the research program from which Marty is funded, he’ll be collecting 5- and 10-liter filtered water samples, which will be analyzed for dissolved 232Th, 230Th, and 231Pa. Those measurements will shared by Bob Anderson’s group at Lamont, as well as Larry Edwards’ group at the University of Minnesota and Chris Hayes’ group at the University of Southern Mississippi. He will also be processing and shipping water samples to the groups that measure Neodymium isotopes and Rare Earth Elements, and for Tim Kenna, who measures man-made radionuclides (Plutonium and Neptunium) in seawater.