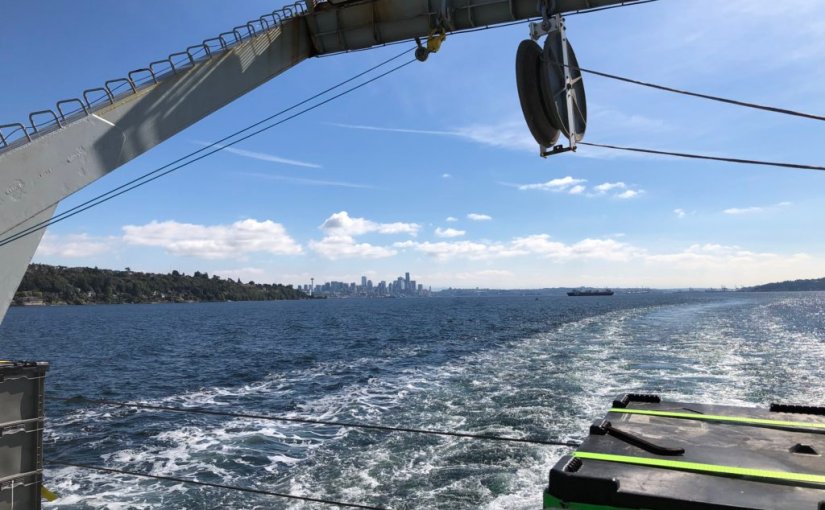 At noon on September 18 the Research Vessel Roger Revelle set sail, and a journey of more than 5,000 miles began. Over the prior four days, more than 50 scientists and crew worked together to pack the nearly 300-foot Revelle to the gills.

Cranes, forklifts and muscle lifted 88 full pallets of equipment on board for the 67-day oceanographic expedition from Alaska to Tahiti. Three shipping containers converted into laboratories now sit where there was once empty deck. Down below, narrow hallways and steep staircases lead to a hive of workstations devoted to different types of analysis. The scientific equipment on board supports 26 separate research projects from 25 of the nation’s leading research institutions.

Scientists and crew will lower many of the key instruments on board to the bottom of the ocean. On their way back up, some instruments collect seawater while others measure things like the water’s temperature and salinity. To manage these deep sea dunks, the Revelle is packing roughly 95,000 feet of cable attached to four huge winches—more than three times the height of Mount Everest (29,029 feet).

Some samples hauled up from the depths need lab space free of potential contaminants to be accurately measured. Creating such a space on a ship that is decidedly not free of contaminants requires a lot of plastic, tape and an array of air filters.

Scientists build these clean rooms, called “bubbles,” with walls of plastic that balloon out with the clean air the filters are pumping in. That air escapes through the door flaps of the bubble and the slight pressure of leaking air helps keep wayward gunk from getting in.

On such a long expedition and with so many people on board, everyday details like food are writ large.

Twelve pallets stacked six-feet high took more than three hours and all hands on deck to bring down to the ship’s refrigerator, freezer and dry food storage rooms. The cost of all that food topped $43,000. That total may seem astronomical, but, spread across 59 people and 67 days, each person’s daily share of food is $10.87.

A taste of what loading food for 50+ people for more than two months at sea looks like. It took ~3 hours and nearly everyone on board to load the 12+ palettes onto the @RVRogerRevelle #nsffunded #oceanography @NSF_GEO @geotraces pic.twitter.com/rCnnEyw2qv

At 11:30 a.m., over the loudspeaker the captain called out, “All ashore who’s going ashore!”A flurry of trash bags and cardboard boxes flew over the ship’s rails into a nearby dumpster and a few stragglers made their escapes.

The gangway is up and we are getting ready to leave port here in Seattle. We will soon begin our expedition studying the ocean from Alaska all the way to Tahiti!@RVRogerRevelle@NSF_GEO@geotraces #geotraces #nsffunded #oceanography #rogerrevelle pic.twitter.com/XzxtbfpG9A

Then one of the ship’s cranes lifted the gangway plank leading from dry land to the floating Revelle. The 20-odd-feet of steel rose lightly off its hinge and pirouetted into parallel with the ship’s side where it was secured in place.

The 59 people on board prepared for the next month living and working together to better understand the Pacific Ocean, and thick ropes were untied and thrown back to the Revelle. After days of intermittent rain in Seattle, the noonday sun burned through to blue sky and lit the way out of Puget Sound.