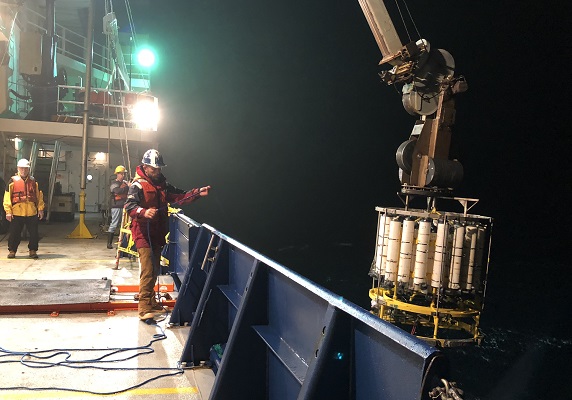 In the middle of the northern Pacific Ocean, the scientists of GP15 encountered a shadowy relic of the marine realm: the oldest seawater on the planet. This blob of ancient water last touched the surface during the peak of the Maya civilization in modern day Mexico and Central America—roughly 1,200 years ago. Shrouded in darkness, this blob is loaded with nutrients like nitrogen and phosphorus, but it’s also acidic and oxygen-depleted compared to most of the ocean.

Once this water lost contact with the atmosphere, oceanographers started counting its birthdays. “So much happens when water is at the surface—gases in the air are exchanged and nutrients like nitrogen get sucked up by plankton,” said Co-chief Scientist Phoebe Lam of the University of California, Santa Cruz.

For oceanographers, this water is a trove of ocean history. “These waters are the sum of all these processes in the ocean,” said Co-chief Scientist Karen Casciotti of Stanford University in Palo Alto, California. “I want to know what happens to this water over such a long period of time.”

This water sits around 6,000 feet down and isn’t even close to being the world’s deepest. That title is currently held by a 36,070-foot deep chasm called Challenger Deep that lurks within the already unfathomable Mariana Trench in the western Pacific. Yet, even the waters of Challenger Deep, more than 7,000 feet deeper than Mount Everest is tall, return to the surface faster than GP15’s aged quarry.

Stale but well traveled, this water’s thousand year journey began on the surface of the north Atlantic. After years drifting north and baking in the subtropical sun, evaporation turned the water’s upper layer briny. Near Greenland, things cooled off. Becoming saltier and colder increased the water’s density compared to its neighbors, causing it to sink.

This dense combination of extra cold and salt sank the water to around 6,000 feet where it climbed aboard what oceanographers call, “the conveyor belt.” The conveyor belt is a one-way procession of deep water that travels around the globe. The explanation for every twist and turn of the belt is still the subject of active research, but density is generally accepted as a driving force.

The belt ferries its most stagnant passengers to a dead end, called the “shadow zone,” in the north Pacific. This is where GP15 encountered these dank waters.

The shadow zone is a clump of water almost totally cut off from the surface, an amorphous purgatory of nearly motionless water. Above and below the shadow zone are waters of contrasting densities that lock it in place. Its only escape is being pushed out as “new” thousand-year-old water seeps in.

“This old water carries a chemical history of all the ecosystems it flows under,” said Casciotti. “It’s called the conveyor belt because all these nutrient-rich particles fall onto it, get broken down and their nutrients get carried to the north Pacific.”

But being cut off from the sun and the atmosphere has chemical consequences. The oldest seawater’s oxygen content is low—microbes used it to decompose organic matter like whale poop. All these microbes chowing down in turn release carbon dioxide, which forms carbonic acid and makes the water more acidic. But it’s not all bad news for living things, because the longer this water is cut off from the surface, the longer it has to accumulate nutrients. Near the surface, those nutrients would get snapped up, but deeper down when microbes run short on oxygen and food nutrients like nitrogen and phosphate build up.

Flash forward a thousand years, and the result is a deep sea stew of nutrients. This larder of rotten ocean helps supply the booming sea life of the north Pacific. Off the coasts of places like Seattle and San Francisco these nutrient-laden waters are swept up from the deep by wind in what’s known as coastal up-welling. At the surface, those nutrients fuel huge blooms of phytoplankton that form the base of an ocean buffet.

What about climate change?

The western U.S. seafood industry is built on this old, deep water, but climate change is turning this already acidic brew caustic. The more carbon dioxide humans pump into the atmosphere the more carbon dioxide the oceans absorb, and this means more carbonic acid. Along the west coast, ocean acidification is forcing longstanding oyster farms to treat their seawater to keep the baby shellfish from dissolving in the saltwater acid bath.

So far, climate change hasn’t exerted much influence on the size, speed or direction of the conveyor belt, but it’s not outside the realm of possibility. “The rate of the conveyor belt has changed in the past,” said Lam. “During the last ice age it’s thought to have become more sluggish.”

In what might generously be described as a Hollywood blockbuster, the 2004 movie The Day After Tomorrow imagined what might happen if climate change caused this huge ocean process to grind to a halt. In a span of days, a tidal wave hits New York City, super storms the size of continents appear and much of the Northern Hemisphere descends into an ice age.

“The real life version of The Day After Tomorrow scenario is that rising global temperatures melt glaciers in northern Canada and Greenland, sending lots of fresh water into the system,” said Lam. “Because this water isn’t salty it doesn’t sink, which in theory could shut down the conveyor belt’s north Atlantic source of deep water and make things pretty chilly in Europe.”

Crucially, this sort of shift would play out across years or decades, rather than days as it does in the film. Oceanographers have been looking for changes in ocean circulation, but only hints have emerged thus far, according to Lam.

A litany of ocean processes accumulate in this ancient, deep water. Dissecting its chemistry offers an opportunity to fine tune oceanography’s understanding of these cycles. Do current models correctly predict what shows up at the end of the line? What about rare elements that are also necessary for life like iron? “This water helps you check your work,” said Lam. “We’ve got ideas of how various trace elements and isotopes behave at this scale based on limited data, but now we’re putting it to the test.”

This antique slurry lets GP15’s scientists reach beyond their GPS coordinates to capture the life and times of the chemical ocean.

“Where iron and other trace elements are getting on and getting off the conveyor belt isn’t well understood,” said Casciotti. “There is a lot we still don’t know. Bringing this water back to the lab is exciting.”