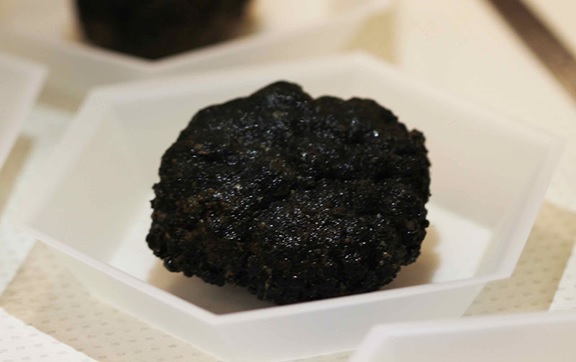 Imagine the year is 2022, a 500-foot deep sea mining ship bobs in the equatorial Pacific Ocean—7.5 degrees North, 152 degrees West. Four years earlier, this was Station 23, where GP15 measured ocean chemistry from the gleaming surface to the sunless abyss.

Mahi mahi hunt the flying fish hiding in the mining vessel’s shadow. A hose as thick as a tree trunk emerges from the ship’s hull and into the azure waters. Shafts of sunlight parallel the hose’s descent until the water turns cold and dark.

The motors driving the vacuum pumps are deafening. Sediment that took tens of thousands of years to accumulate is sorted by the ton. Like gold rushing 49ers in the riverbeds of California, these deep sea miners are panning an area of the deep Pacific seafloor called the Clarion-Clipperton Zone for potato-sized nuggets called polymetallic nodules.

These metallic spuds take millions of years to form and are rich in the raw materials needed to make cell phones, wind turbines and electric car batteries—manganese, cobalt, nickel, copper, and rare earth elements. Demand for these technologies is on the rise and so are the prices of the metals required to manufacture them. Cobalt for example, is essential for producing the lithium-ion batteries in most cell phones. In March of 2018, the price of cobalt hit a record high of $95,250 per ton, a rise of more than 400 percent since 2016.

Elsewhere in the Clarion-Clipperton Zone and around the world, the rest of the deep sea mining fleet grinds, sucks and sifts valuable minerals from the ocean floor using technology developed for offshore oil extraction. As the cost of techniques used to drill for deep ocean oil went down and the price of minerals like cobalt went up, deep sea mining went from a hair-brained scheme to a profitable venture.

Three miles underwater, the hose connects to something that looks like a cross between a bulldozer and a vacuum that Canada-based deep sea mining company DeepGreen calls a “harvester.” The harvester’s tank treads stamp the millennia-old mud with corrugated symmetry. In these nearly motionless waters, the tracks will remain clear as the day they were made for hundreds of years.

Rattail fishes, large red shrimp, and cusk eels whip their tails and flee across the abyssal plain in advance of the harvester’s billowing plume. The nozzles rip into the seafloor with powerful suction—hoovering nodule-laden slurry back up to the ship.

A ghostly white octopus, belonging to a species discovered in 2016 and nick-named Casper, protects a clutch of eggs laid directly onto one of the metal nodules. Its pale, limp body, adapted to the crushing water-pressure, disappears into the maw of the harvester along with its brood of 30 eggs. In the near freezing temperatures of the deep sea the eggs might have taken as long as four years to hatch. A sea sponge with a skeleton made of glass splinters as it lifts out of the mud along with the crustaceans and worms taking shelter in its fiber-optic limbs.

Life is slow and precarious 16,000 feet down, built on the predictability of a harsh environment that scarcely changes. This is not a forest that will grow back—the nodules, if they regenerate, will take tens of millions of years. The erasure of this undersea landscape is all but permanent.

Back at the surface, species not yet described by science compress beneath a mound of ancient mud and metal. Since the 1970’s, nine out of every ten species encountered in the Clarion-Clipperton deep sea mining zone had never been seen before. Once the polymetallic nodules are plucked from the morass, the mud will be dumped back into the sea.

An invisible industry starts to take off

Right now in 2018, there are dozens of vessels prospecting in the Clarion-Clipperton Zone—taking cores and mapping mineral resources. “The problem with deep sea mining is that people either think it’s science fiction or it’s not happening in their backyard,” said Douglas McCauley, a marine biologist from the University of California Santa Barbara.

The details of mining more than 6,000 feet beneath the waves can vary depending on what is being mined and where, but the preceding vision of the not-so-distant future is eminently possible. “This is like nothing we have done in the oceans before,” said McCauley. “There are question marks around all facets of this activity and yet it seems like we’re going to do it.”

The idea to mine the deep seas has been around for half a century, but a combination of economics and technology finally tipped the scales toward potential profits in the last decade. Beginning in 2001, a United Nations body called the International Seabed Authority has issued mining permits to a mix of 26 countries, state-owned organizations and private corporations. If all the required permits sail through unimpeded, mining could begin as soon as 2022.

GP15’s path cuts through the western edge of the Clarion-Clipperton Zone, an area of keen interest to deep sea mining outfits. It spans 3,100 miles across the Pacific Ocean, ranges from 12,000 to 18,000 feet deep and is rich in polymetallic nodules. Seventeen of the world’s 26 active contracts for deep sea mining exploration are within the Clarion-Clipperton Zone. These contracts cover 386,000 square miles of seafloor, an area larger than the states of California, Oregon and Washington combined.

Outside the Clarion-Clipperton Zone, hydrothermal vents and undersea mountains may be mined with heavy equipment for grinding and pulverizing their valuable crusts. Minerals that could be harvested from these other two sources include cobalt, manganese, copper, iron, zinc, silver, platinum and gold.

Deep sea mining owes some of its current appeal to environmental and humanitarian issues with existing supply chains for metals like cobalt. More than half of the world’s cobalt comes from the Democratic Republic of Congo, but along with the silvery metal comes a litany of human rights violations, including child labor. This allows deep sea mining companies to position their future product as a more ethical alternative.

The lesser of two evils?

It is inarguable that the deep sea mining workforce is likely to be better treated and better compensated than those working the Congolese mines. Deep sea mining’s second contention—that it is also more environmentally friendly than mining on land—is more tenuous.

“I don’t think there are any easy answers here, but, environmentally speaking, there is no good that comes out of sea bed mining,” said Jeff Drazen, a deep sea biologist from the University of Hawaii. “All the consequences are negative.” Drazen is one of the few scientists to explore the abyssal plain ecosystem of the Clarion-Clipperton Zone with remotely operated vehicles and cameras.

“Half of the species we have observed appear to rely on the nodules, even mobile animals seem to prefer them, said Drazen. “The nodules are precisely what make this habitat unique.”

The consequences of mining for polymetallic nodules are extreme at the local scale. A denuded seafloor and miasma of smothering sediment would follow anywhere the harvesters went. Mining at sea could also generate noise pollution harmful to whales and dolphins. But farther reaching impacts are also cause for concern.

“Toxic metals like cadmium and mercury are in these deep sea sediments,” said Drazen. “If you release them into the middle of the water column they could easily get into our ocean food supply.”

The scientists of GP15 also wonder what dumping thousands of years of accumulated mud would do to ocean chemistry. “All of the deep sea mining exploration areas in the Clarion-Clipperton zone overlap with one of the biggest oxygen deficient zones in the ocean,” said GP15 Co-chief Scientist Phoebe Lam of University of California, Santa Cruz. “If these sediments got dumped between 300 and 3000 feet, the low oxygen environment could potentially accelerate the release of heavy metals.”

The severity of this problem will come down to whether most companies pipe their leftover mud all the way back down to the sea floor or if they kiss it goodbye just deep enough to remain out of sight. Dumping in the ocean’s middle depths would provide a more direct line from the mud’s toxic contents to larger fish eaten by people. Drazen would like to see a requirement that ships discharge their leavings back at the sea floor where they came from.

A significant unknown is whether excavating and redepositing thousands of years of nutrients, toxins and stored carbon might impact the ocean’s miraculous ability to absorb carbon dioxide and mitigate climate change. The dynamics involved are complex, but the oceans are interconnected and the effects of tinkering with age old repositories are unlikely to remain isolated.

If mining does begin as soon as 2022, monitoring its impacts will be the next challenge. This is where GP15 comes in. “We have the expertise to measure everything the biologists think might be toxic,” said GP15’s Lam. This GEOTRACES expedition will establish a baseline for the area’s ocean chemistry before any mining takes place. If the 17 mining parcels in the Clarion-Clipperton all come to fruition, this baseline can help regulators monitor any future shifts in ocean chemistry.

“An important part of characterizing this ecosystem is understanding its chemistry,” said Drazen. “Deep sea mining has the potential to change that chemistry, so having GEOTRACES go through this area is invaluable.”

To their credit, the budding deep sea mining industry seems interested in the opinions of the scientific community. This makes it an even more important time for GP15 to be collecting these data.

“This is a really good time to be involved and to contribute our expertise,” said Lam. “The timing of our cruise is perfect.”

For McCauley and Drazen, the key to ensuring this new industry pays heed to their warnings is increasing the public’s awareness of the endeavor and its risks. “If someone was strip mining in your neighborhood you would notice and care about it,” said McCauley. “But most people in Hawaii or California have no idea this is happening.”

To make good on this rare opportunity to scrutinize an industry’s impact before it takes off, public interests need to take their seat at the table alongside the mining companies currently dominating the conversation.

Otherwise, the logic for mining the deep seas runs like this: The technology of the future, from supercomputers to renewable energy hinges on the ability to store and distribute electricity. The metals needed to power that future are found in the deep sea. Where better to obtain them than far from the existing dirty, corrupt supply chains on land?

“I’m not sure I’ve made up my mind about whether deep sea mining is better than other exploitative mineral extraction methods,” remarked Lam. “It might be a false dichotomy, but it’s hard to choose a deep sea fish over a child in the Democratic Republic of Congo.”

To this end, McCauley and others are engaging international battery alliances about how to improve the existing battery supply chain. The appeal of deep sea mining appears to boil down to being the lesser of two evils. But, before we ransack the deep, it is imperative to interrogate the question of whether two evils are the world’s only choices.

To learn more about other issues impacting the deep sea visit the Deep Ocean Stewardship Initiative.

Note: The author reached out to a DeepGreen employee for comment but did not receive a response in time for publication.

One thought on “Deep sea mining appears on GP15’s radar”