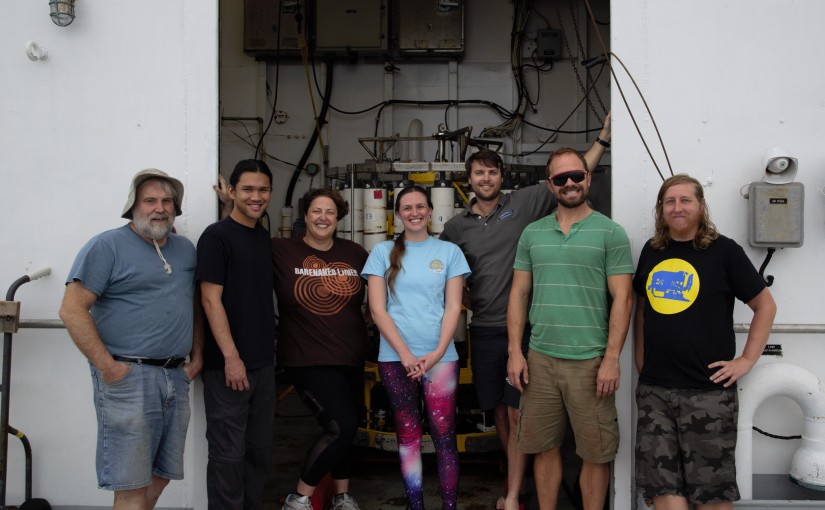 At 4am I watched the meters of wire count down on a computer display as our ship’s scientific instruments neared the surface. The lab aboard the Research Vessel Roger Revelle bustled in anticipation of the sensors and water samples returning from the ocean depths. I hauled bottles, flasks and tubes into the sampling bay to analyze my share of the arriving seawater. For my group, this is just the beginning of the process—we have a chemistry lab set up onboard and analyze GP15’s samples 24 hours a day.

At sea, the scientists and crew members of GP15 work around the clock to learn as much as we can about Pacific Ocean chemistry at each station. Most of the scientists onboard are collecting samples for their own research projects, but I’m part of a team of professional chemists and technicians from the Oceanographic Data Facility (ODF) at the Scripps Institution of Oceanography who help collect and analyze water samples. Instead of working on a specific project like professors and graduate students do, we supply data to different groups on every cruise.

I’m one of two chemistry technicians but we also have two Resident Technicians (ResTechs), an Electronics Technician, a Data Analyst, and a Computer Technician. As a Chemistry Technician, I am responsible for measuring marine nutrients, salinity and oxygen in the water.

Our measurements provide a backdrop for the smorgasbord of other scientific measurements being collected on this GEOTRACES expedition. Nutrients are elements like nitrogen and phosphorus that tiny ocean plants need to grow and photosynthesize. Aquatic plants and animals need oxygen to “breathe” and survive. Usually, the surface of the ocean is loaded with oxygen absorbed from the atmosphere, but if oxygen is low that can tell a story about what kinds of biological activity might be occurring beneath the waves.

I started out in oceanography nearly a decade ago as a volunteer, and I quickly realized I wanted to make a career out of being a sea-going technician. At sea, the days are long and the comforts of home are nowhere to be found, but when I return I can only seem to remember traveling to new parts of the world and making lifelong friends.

I love being out at sea, and the sight of ocean stretching to every horizon. GP15 is so long that its 67 days are split into two legs, with Hilo, Hawaii serving as a halfway point. The other ODF chemist onboard, Erin Hunt, is staying for both legs—more than two months at sea. The rest of the team traded out in Hilo.

As for the other members of the ODF team, ResTechs ensure everything goes smoothly and safely on deck. They bridge the gap between the scientists and the Roger Revelle’s crew who operate the heavy equipment, like winches, needed to lower scientific instruments into the ocean.

The Electronics Tech keeps the CTD rosette, along with its bottles and sensors, in good working order. The Data Specialist transforms all the measurements taken on this GEOTRACES expedition into an organized database—no small task with 27 scientific projects onboard. All that data needs somewhere to go, and the Computer Technician keeps the ship’s data servers humming. Innumerable other systems on a modern research vessel, from sonar to GPS to satellite internet, run through computers and without the Computer Technician their inevitable hiccups could cause serious trouble.

One major difference between the Scripps team and the other scientists onboard is that most of GP15’s scientists can’t get consistent sleep—they wake up when their group’s samples are hauled up from the deep and then spend long hours on analysis. The Scripps team is responsible for a large chunk of GP15’s scientific output, but we are some of the lucky few with predictable sleep schedules.

Our team structure allows us to work in shifts—either noon to midnight or midnight to noon. Our crew is ready 24 hours a day, but we each get 12 hours off in a row—something many scientists on board can only dream of.

As the cruise is nearing its end, the leg 2 group is looking forward to vacation in Tahiti, while the leg 1 crew has been home for weeks. The data will be finalized before R/V Roger Revelle makes port, then we’ll regroup in San Diego and prepare for our next expedition at sea.